Every Wednesday morning, between 11am and 12:30 pm, you’ll find Debbie and Greg Jensen at Parenting Now lining tables with diapers, setting out their tiny scale for infant weigh-ins, and waiting to greet families arriving for Baby Connection. 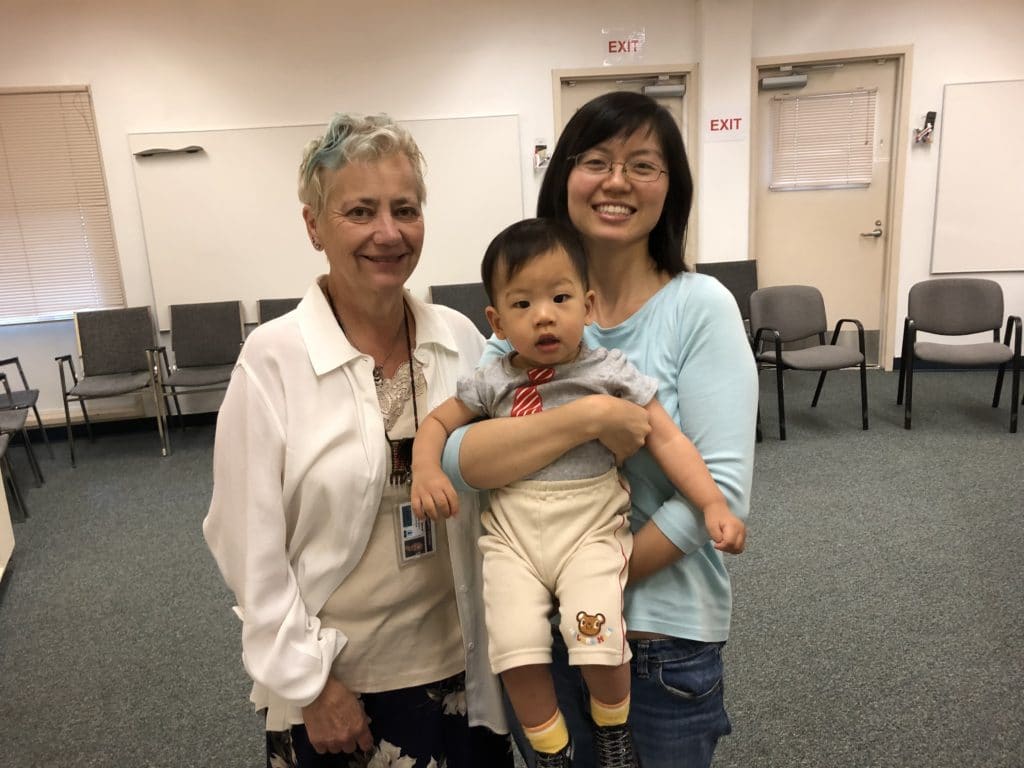 February 2019 marked the 10-year anniversary of Baby Connection, a weekly drop-in support group for new parents in search of companionship, feeding support and safe place to ask questions. Baby Connection was designed to support moms, connecting them with other parents and needed services or resources. “One of the most helpful and supportive connections new parents can make, is with each other,” says Debbie who, with the help of the Breastfeeding Study group, envisioned the idea for Baby Connection.

In 2010, Lane County was identified as having the highest infant mortality rate in Oregon. Since then, mortality rates have decreased thanks in part to the work Debbie and Greg provide. “Supporting breastfeeding and families with newborns is identified as one way to promote healthy children and to decrease the risk of infant death,” says Debbie. At Baby Connection, Debbie and Greg, with the help of community volunteers, help new mothers answer questions they have about feeding and caring for their babies. A free baby weight allows parents to be sure their baby is growing at a healthy rate.

For their service to the community, the Jensens were honored with Parenting Now’s 2019 Champions of Children, an award they received on March 1 at Parenting Now’s Hollywood Nights Auction & Gala.

A History of Caring

Debbie and Greg first met when they were 15. While waiting in line for a ride at the County Fair, Debbie’s then-date chickened out and didn’t want to go on the ride. That’s when Debbie heard a voice from behind saying “I’ll ride with you!” It was Greg. The two married at 19 and have since used their collective talents to serve families all over Lane County.

After high school, Debbie attended nursing school at Lane Community College, graduating as an LPN. She then took a nursing job at Lebanon Community Hospital, where she worked in the maternity ward and ICU, assisting in deliveries and taking care of babies and critically ill adults. Debbie eventually returned to school, earning an Earning an Associate Degree in Nursing, a Bachelors in Management and Leadership, a Bachelors in Nursing, and eventually a Masters in Education.

While working in the NICU at PeaceHealth, Debbie served on the first Unit Based Council. The Council was instrumental in revolutionizing the care that moms and babies received. Babies were positioned for comfort, lights were lowered, quiet sounds and skin-to-skin holding worked to create a space of security resembling as closely as possible being in utero. During her years of work in the NICU, many new life-saving technologies were introduced. Debbie was one of the first nurses to care for the very small, fragile babies who needed the new technology to survive.

In 1986, Debbie, together with two other nurses, Pat Kelsey and Sheila Wallace, developed a breastfeeding assessment tool called LATCH. When a nurse uses LATCH to describe a breastfeeding session, specific characteristics of the feeding are identified. “These characteristics are scored according to what the nurse has seen and heard at the bedside,” says Debbie. “LATCH also allows the nurse to clearly communicate the mother’s need for additional help.” LATCH is used in hospitals and research projects around the world. It has been translated into several languages and published in nursing textbooks worldwide.

Today, Debbie uses her experience in the NICU to help parents coming to Baby Connection. “Baby Connection was a lifesaver for me when I first moved to Eugene,” says Erin Conway White. “Debbie even came to my home for a visit when I was needing help. Baby Connection was a very welcoming place that eased a lot of my worries, and made me feel more comfortable breastfeeding. I especially loved that they take a photo of you and your baby each visit and send you home with a print.”

Greg is a very welcome presence at Baby Connection, affectionately referred to as “Grandpa.” He uses his experience and expertise to help new father’s adjust to their role in care of a new baby. Greg frequently is asked to speak at regional conferences on the topic of “a  father’s influence in the life of his child.” 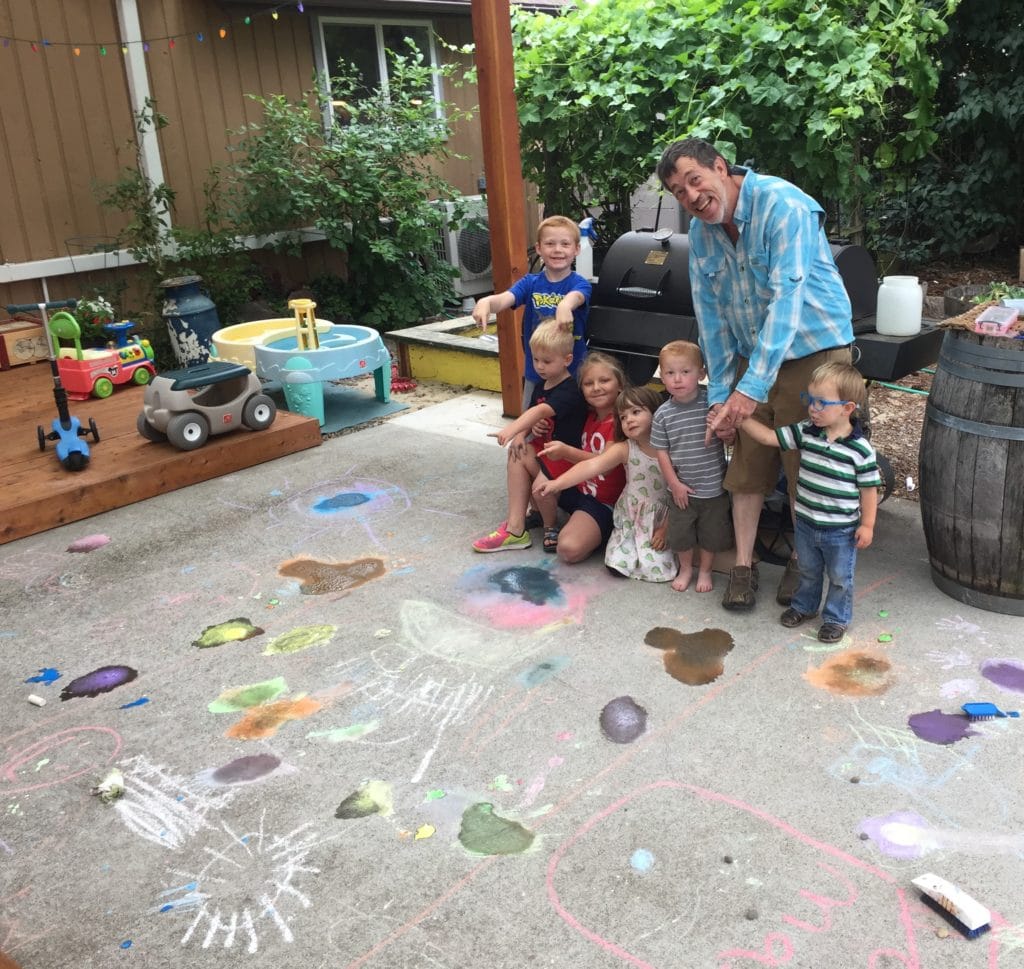 Debbie also works in the Nurse Family Partnership Program, a federally funded program that follows moms through their pregnancy and continues with home visits after the baby is born. “Debbie provides stellar compassionate care to families who are expecting their first baby–providing support and guidance along the way,” says Chelsea Whitney, Nurse-Family Partnership Supervisor. “Not only does she provide support to new families but she shares her wisdom and education with her peers, providing training to other nurses.”

Baby Connection is offered every Wednesday from 11 am to 12:30 pm in the Parenting Now atrium at 86 Centennial Loop. The Language of Newborns is a parent education class offered by Parenting Now. This class focuses on understanding a newborn’s needs and engages parents learning how to recognize their baby’s cues. Debbie developed this curriculum and teaches the class once a month at Parenting Now

This articled appeared in the February 18, 2019 edition of the Register-Guard.